"The Tempesta Basel fascinated the audience"

"...a brillant opening of the festival" „The beautiful voice of the swiss- spanish tenor Felix Rienth is perfect for the interpretation of these cantatas, paired with elegance and flexibility…"

"The recorder sonatas (both by Francesco Mancini) are the finest of the performances. Delightful sparkle in fast movements, effortless languid decoration in slow ones, spot-on pitch, and nuanced virtuosity animate the recorder playing of Muriel Rochat Rienth; and the accompanying ensemble is well matched and responsive.."

"The harpsichord toccata by Nicola Fago (1677-1745) is much in the style of Domenico Scarlatti with repeated bass notes and rapid upper passagework, well played by Norberto Broggini."

"Among the cantatas, the best is 'Pur Nel Sonno’ by Giovanni Fischietti (1692-1743) where there is nice expression and flexibility in the extended recitative section along with effective interplay between the recorder and tenor in the final Allegro. In other cantatas there are some fine passages from Felix Rienth such as the depiction of wind and sunlight kissing the beloved in Scarlatti’s  "Ardo E Ver"..."

After two succesful CDs on Enchiriadis, La Tempesta Basel is soon presenting a neapolitan baroque programme on VANITAS. The latest release include Tenor Cantatas by Scarlatti, Sarro, Hasse, featuring tenor Felix Rienth and Recorder Sonatas by Mancini with Muriel Rochat Rienth, as well as a Cantata by Giovanni Fischietti as "world premiere recording". VANITAS, a spanish classical CD label, is worldwide distributed by Challenge Records (Holland) and NAXOS of AMERICA. "...the audience enjoyed the beauty of the music and the splendid performance"

"A brillant opening of the festival"

Other CDs by La Tempesta Basel on Enchiriadis / NAXOS: Click here  to read the article of magazine "RITMO" (in spanish)

"...and the Tempesta Basel has emerged with a fine disc."

"...it is certainly worthy of obtaining if you want an excellent performance...."

"I don’t think I have encountered Rienth before, but I am impressed by the fullness and firm projection of his clear tenor voice, joined with excellent sensitivity to text values. "

"That said, this is a disc which Telemann aficionados will certainly like to have. It is an attractive programme..." "...the interpretation by chamber ensemble La Tempesta Basel, which presents its debut CD, is simply excellent and full of musicality..."

"...shows, that this is an ensemble from which we can expect a lot in the future..."

"...this is altogether a most enjoyable recording..."

"...and has raised the bar very high, thanks to the interpretational qualities..." In spring 2019 will be published the latest CD of  La Tempesta Basel, featuring an italian baroque programme from Naples with Tenor Cantatas by Scarlatti, Sarro, Hasse and Recorder Sonatas by Mancini, specially to mention a Cantata by Giovanni Fischietti , presented as a "world premiere recording". This new CD is edited by spanish label VANITAS, distributed by Challenge Records (Holland) and NAXOS of America.

"An excellent interpretation by tenor Felix Rienth, whose beautiful timbre reminds one of the legendary Anthony Rolfe Johnson..." The Basle tenor with Spanish mother started his career as "First boy" in a production of Mozart's "Magic Flute" at the Basle Opera House, conducted by Armin Jordan. As a tenor, he has performed at major festivals, for example in Ambronay, Paris, Ghent, Lisbon, Porto, Granada, World Expo Zaragoza and has worked with Eduardo Lopez Banzo and Gabriel Garrido. Felix was invited to the Cologne Philharmonic Hall, the Salzburg Mozarteum Orchestra, Graz Philharmonic Hall, the Geneva Victoria Hall, Zurich Tonhalle, Basle Musiksaal. He has also recorded about more than 20 CDs on the labels K617, Ricercar, Symphonia, Enchiriadis, Pan Classics, OehmsClassics. His CD of cantatas by the Spanish composer Francesc Valls was awarded the "Prelude Classical Music Award 2007" as best Baroque release of the year. (other awards including "diapason d'or", "CD of the year" in Spain . With La Tempesta Basel  he recorded J.C. Pepusch's cantatas for Enchiriadis. His recording of spanish baroque songs "Tonos humanos" by José Marín was elected as  a  "reference recording" by german magazine "Klassik Heute". Recent concerts included Schubert's "Mass No. 6" with the Suisse Romande Orchestra, Mahler's "Song of the Earth" with the Palma de Mallorca Philharmonic, Haydn's "Creation" with the Constance Philharmonic, "Messiah" in Munich, "Saint John Passion" in Geneva and Zurich as well as "Eliah" in Lisbon and "Paulus" in Paris. In 2008 he gave a baroque recital at Motril International Music Festival (Spain), in presence of Her Majesty, Queen Fabiola of Belgium. Recently, Felix Rienth was invited to Bach's "St John Passion"  in Holland and Austria with the "Orchestra of the 18th Century", conducted by Frans Brüggen. Latest recording appearing in 2019 include an italian baroque programme with LA TEMPESTA BASEL, as well as  Guiliani's Songs for tenor and guitar, both for VANITAS.

"...as well as Pepusch's recorder sonatas, which are presented with intensity by the young leader of the ensemble, Muriel Rochat Rienth..." Born in Basle, she finished her studies (solo diploma) at the renowned Schola Cantorum Basiliensis with Michel Piguet. She is founder and director of La Tempesta Basel. Muriel Rochat Rienth regularly performs as a soloist recorder concertos by Vivaldi, Sammartini, Telemann with different Swiss orchestras, including radio recordings by Swiss German Radio, Radio Suisse Romande and several radios in Germany, Belgium, Spain, Holland and Canada.  She performed in Switzerland, Italy, Austria, Belgium and Spain at different festivals. Muriel's CD-releases include the complete recording of Händel's "Recorder Sonatas" for spanish label VANITAS, elected as a reference recording and among "the 10 best CDs of the month" in Spain and with high acclamation in swiss, spanish, german, dutch an US magazines (FANFARE) , and Telemann's "12 fantasias"  also enthusistically reviewed by international music press. Next CD release will be the complete recorder sonatas of Veracini, on VANITAS. Muriel Rochat Rienth teaches at the Conservatoire de Fribourg (Switzerland). Born in Buenos Aires, he is the regular continuo player of "Ensemble Elyma" which tours worldwide and is conducted by Gabriel Garrido. Concerts including Edinburgh Festival, Cuba, Brazil, France, Italy, Spain, USA.

Nathalie started learning clavichord in her childhood and studied finally at Schola Cantorum Basiliensis with J.A. Bötticher, further studies with Andrea Marcon in Basel and to Amsterdam (organ) and Strasbourg with Christophe Mantoux, finishing with organ diploma. Today she is a regular organist at different swiss churches and is working as clavichord player at Schola Cantorum Basiliensis. Nathalie performed several concerts with La Tempesta Basel, such as in Switzerland, Spain, Germany and Austria.

The La Tempesta Basel is featuring on spanish CD-label VANITAS with an italian baroque programme, presenting Cantatas by Scarlatti, Sarro, Hasse, with tenor Felix Rienth and recorder player Muriel Rochat Rienth, CD was  recorded in Spain and will be  published in 2020, worldwide distributed by Challenge Records , Holland and NAXOS of America. 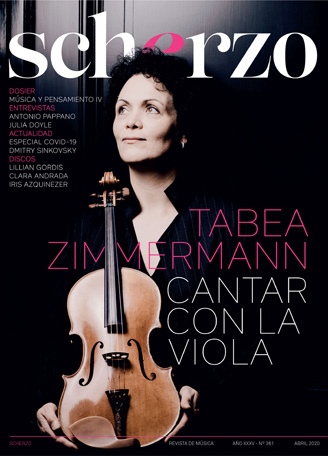 „It’s really a pity there are not so many CDs of LA TEMPESTA BASEL on the market. Above all, because this ensemble has a enviable musical level…“

„The beautiful voice of the swiss- spanish tenor Felix Rienth is perfect for the interpretation of these cantatas, paired with elegance and flexibility…

„…and the excellent recorder player Muriel Rochat Rienth, playing two sonatas by Mancini, once again – i still can remember her brillant CDs of Handel and Telemann- she is spoiling us with her virtuosity, delicacy and musicality…“

„And i come back to the beginning, with an important question: why they don’t record more CDs? „

American magazine "FANFARE" published a great review of La Tempesta's new CD in the july 2014 issue, describing it as a " fine disc" and an "excellent performance"

Tenor Felix Rienth was invited october 2014 at Spanish National Radio as an interview-guest. In this radio-show he talked about La Tempesta Basel's discography and history.

La Tempesta Basel in Graz (Austria): succesful concerts in october 2012 at Styrian capital with the programme "Händel and his London contemporaries"

"The La Tempesta ensemble from Basel is led by recorder player Muriel Rienth, who performs with clarity and a good sense of phrasing. She blends with the voice, her husband Felix Rienth, so that the two form an inseparable duo. The continuo group remains discretely in the background, giving a solid foundation but never overshadowing the upper lines. "

"Felix Rienth has a light and flexible tenor, always on pitch and giving the music much in the way of fine nuance, making Pepusch come alive. I am also impressed by Norberto Broggini’s playing of the organ voluntaries. He has a fine knack for choosing good registrations that are never overbearing, but always bring out the frenetic lines with seeming ease. This is one fine disc, and not only does Pepusch need to be resurrected beyond the The Beggar’s Opera, this performance does his competent and interesting music full justice."

"..the pastoral texts are in English, performed suitably dramatically and with good English pronunciation by tenor Felix Rienth..."

"Muriel Rochat Rienth, the director of the group, sets the scene with her stylish obbligato recorder playing. She is also the soloist in three attractive sonatas for recorder and continuo."

"This is altogether a most enjoyable recording".

"... as well as Pepusch´s recorder sonatas, which are presented with intensity by the young leader of the ensemble, Muriel Rochat Rienth, accompanied well by a continuo, consisting of bassoon, cembalo or viola de gamba.."

"...on the present CD, which is the recording premiere of the baroque ensemble La Tempesta Basel, Swiss-Spanish tenor Felix Rienth sings four of Pepusch's English cantatas with admirable confidence and taste.."

"...and has raised the bar very high, thanks to the interpretational qualities in the vocal parts with the beautiful and stylistically confident voice of tenor Felix Rienth, as well as in the instrumental parts, where Muriel Rochat Rienth´s recorder clearly stands out and also features very prominently in the cantatas..."

"An excellent interpretation by tenor Felix Rienth, whose wonderful timbre, paired with great technical ability, reminds one of the legendary Anthony Rolfe Johnson."

"The same can be said of the ensemble´s leader and recorder player Muriel Rochat Rienth, who is accompanied by bassoonist Philippe Miqueu, the Romina Lischka on the viola de gamba, Norberto Broggini on the cembalo."

"The colourful, transparent and imaginative music is in the best of hands (and throat). Muriel Rochat Rienth teases out of her instrument, which has its natural limitations, soft and blossoming lines, and tenor Felix Rienth’s communicates well with her at the same level, whilst Norberto Broggini as soloist makes one realise that Pepusch’s organ music is worth being rediscovered not only by experts, and the general bass group does its job with the necessary amount of discretion and delicacy."